Day in the Life of a Remote Company: X-Team

Day in the Life of a Remote CompanyHiring RemoteWorking Remotely 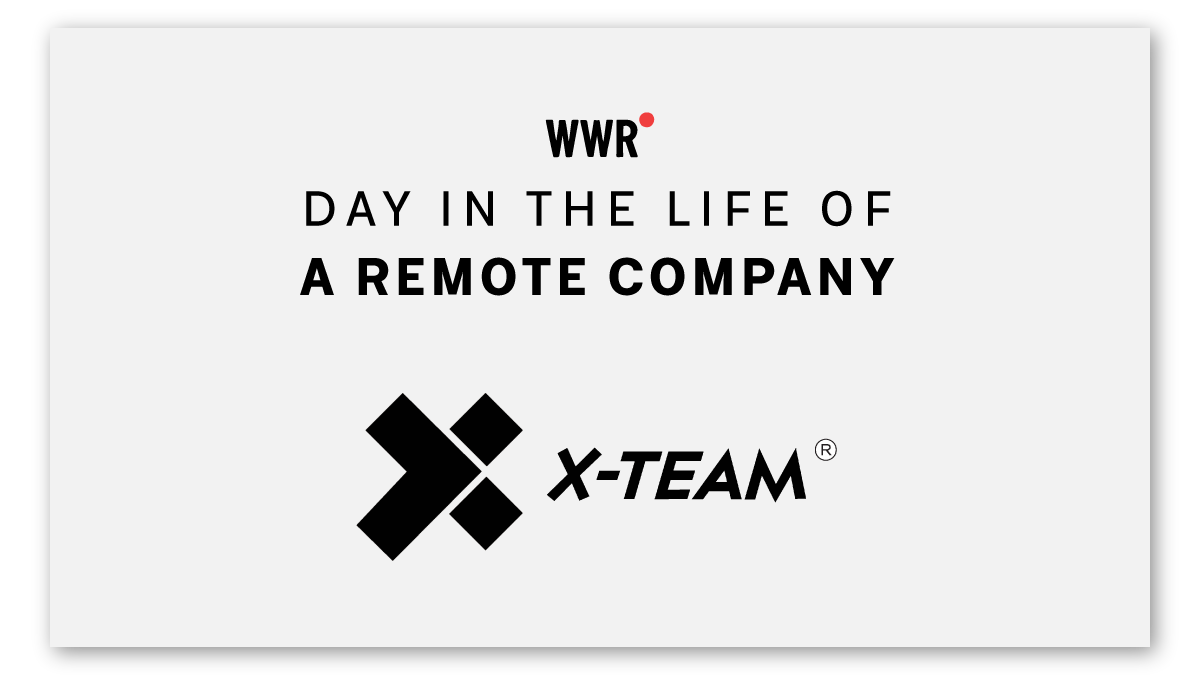 Kicking off in 2006 before Slack, Zoom or Trello existed, X-Team was founded with a remote-first mindset from the start. The company's unwavering mission to create opportunities that aren't location-based has empowered their team to grow exponentially in the last decade into one of the biggest remote developer communities out there. What's really appealing about X-Team is their matter-of-fact perspective about remote work. There's no need to dazzle and charm people with remote work because it just is. X-Team community lives and breathes remote work, and as a result, their company and team members are thriving.

HQ: We’re spread all over the world and have zero offices, but technically our headquarters is in Melbourne, Australia.
How many countries or cities do your team span across? Over 50 countries and 100 cities.


Day in the Life of

What does a typical day look like at your company? 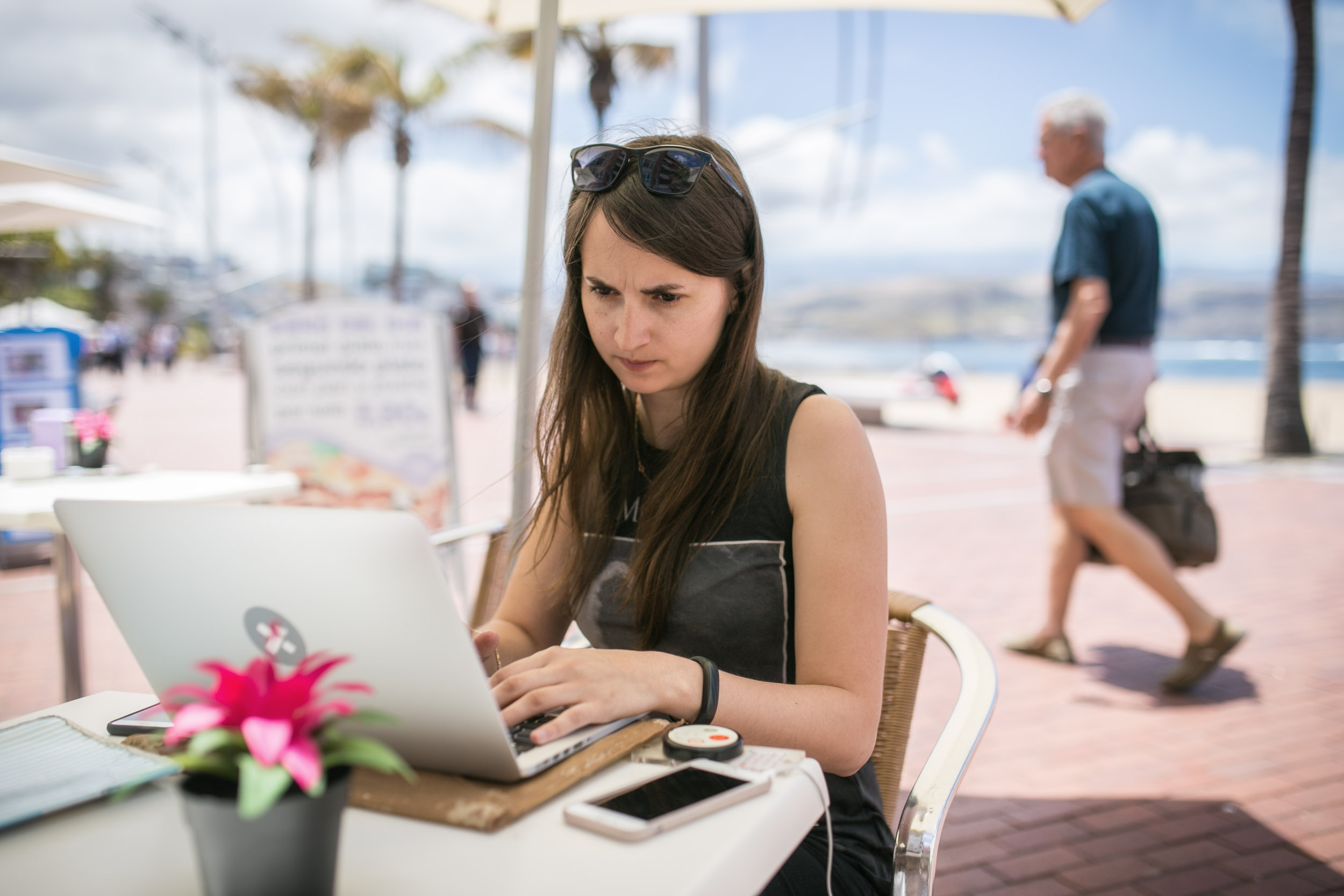 We actually made a quick video to help give you a taste.
Because X-Teamers are spread all over the world, we operate pretty much around the clock. We make sure that every team working with one of our partners include developers from all time zones, so there’s always someone ready to jump in for urgent requests. 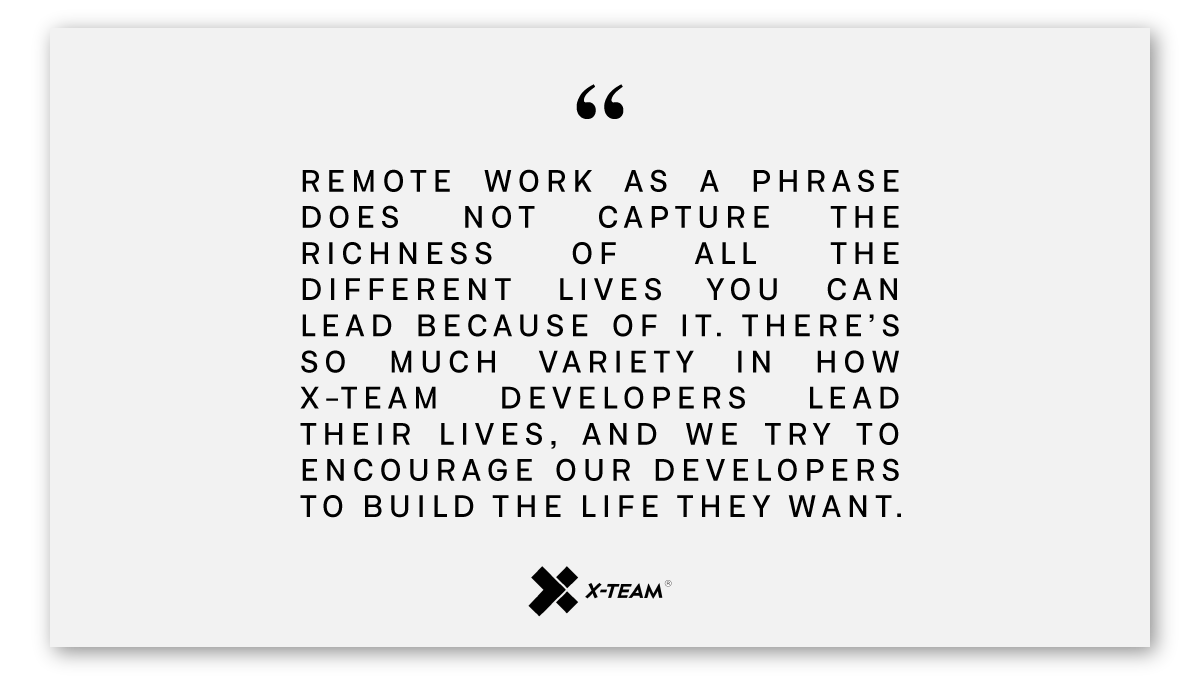 Why and how did you decide to go remote?
We want to help build a world where access to opportunities isn’t dependent on where you live, but on the value you can create. For over a decade, X-Team has been hiring developers from over fifty countries, often from places where developers - no matter how skilled they are - just don’t have that many opportunities. With X-Team, these devs now get to work with the world’s leading brands.
We want to be a company where developers can thrive. Where they could create the lifestyle they saw for themselves. Remote work gives our developers the freedom to do exactly that. There’s no commute, no distractions, no unnecessary meetings. We believe that empowered, energized, and inspired developers do their best work, and we’ve been working hard creating a framework for them to thrive in.
Of course, all this was easier said than done, at first. We were founded in 2006, when there was no Slack, no Zoom, no Trello. Skype was barely usable, and even Facebook barely existed back then! But we made it work and it’s only become easier since.
How does your company advocate for remote work?
We don’t necessarily advocate for remote work. Everyone at X-Team works remotely, so remote work is a given. Instead, we advocate for creating the lifestyle you want to lead. If that means traveling the world, then we encourage it. If that means building a family, then we encourage it. If that means teaching your local community a programming language, then we encourage it.
Remote work as a phrase does not capture the richness of all the different lives you can lead because of it. There’s so much variety in how X-Team developers lead their lives, and we try to encourage our developers to build the life they want.
How has being remote influenced your company’s organizational structure?
X-Team has always been a very “flat” company when it comes to hierarchy. We try to keep middle management to a minimum, so we can empower our developers as much as possible. Time zones and flexible schedules mean that you simply can’t have 12 layers of decision-making. Remote work requires you to give authority to the people actually doing the work instead of giving it to those who are disconnected from it and lack context.
Additionally, companies tend to believe they can copy and paste their office culture into software like Slack and call themselves remote. In reality, remote work requires you to rethink some fundamental aspects of how your company does things. Culture simply doesn’t transfer from an office to online.
It’s not because you have everyone on a few Slack channels that they’ll start chatting away. People tend to only talk about work, particularly in shared channels. If you’re not careful, your Slack channels will become so dry and boring they’ll start collecting cobwebs before you know it.
X-Team combats this problem in many ways, but here are two examples. One, every X-Teamer has a Slack journal that’s publicly accessible for everyone. This does a few things. Firstly, it satisfies the urge of a remote worker to show that they’re productive. The right people can see what their colleagues are working on.

A snippet from a Slack journal

Secondly, because every Slack journal has a few people invited to it, it’s easy for anyone to get help or guidance when they’re struggling with something. Just put it in your journal and someone will help you out. This, in turn, further reduces the need for more management and meetings.
Thirdly, it eventually creates a huge database of publicly available knowledge. X-Team has years of findings and insights stored in the journals of our developers. Developers can pull from their diaries to help others.
That’s one example of how we differ from a non-remote company. Another example is our bounty system. We have hundreds of bounties that X-Team developers can complete in exchange for coins, which buys them collectibles from our creator store called The Vault. It’s how we incentivize the right behavior (like reducing our carbon footprint) while keeping our channels full of activity. 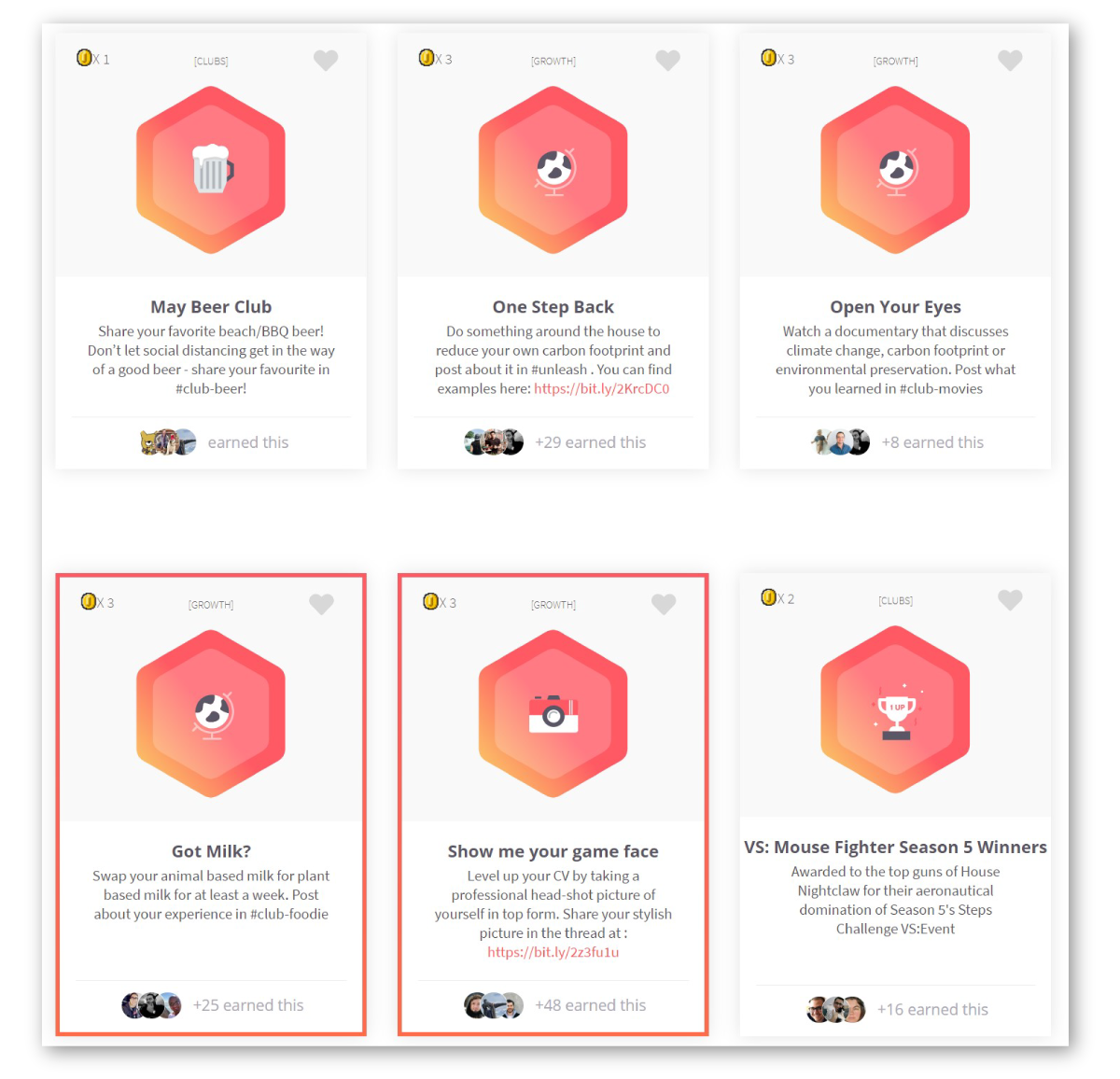 A few of our bounties

What cultural practices set you apart as a company?
We’ve already spoken about a few practices above, but one of our biggest differentiators is the X-Outpost. Every month, we give X-Teamers the opportunity to get together in a hackerhouse to explore and work in some of the world's most beautiful places. We’ve been to dozens of countries already: Austria, Argentina, Japan, the Philippines, etc.
Many of our developers use the freedom of remote work to travel the world. The X-Outpost makes it easier for them to do so. Not only does X-Team pay for epic accommodation, but X-Teamers get to meet their colleagues too. This is a great way to combat some of the downsides of remote work, loneliness in particular.
Of course, right now we’ve suspended all X-Outposts until it’s safe to travel again. 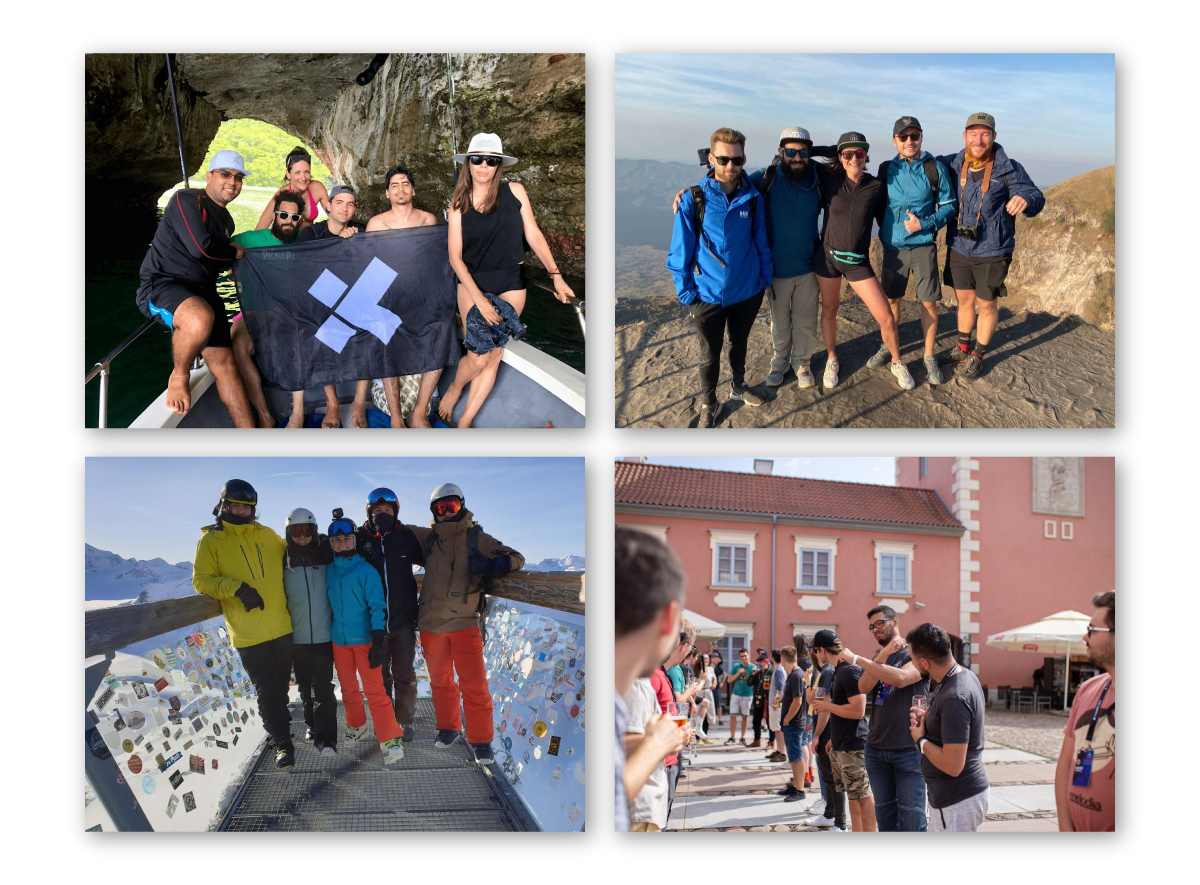 A few pics from our X-Outposts around the world

What kind of benefits do you offer your employees to ensure they are comfortable in their role and working remotely? Why do you think these are important?
We give every new hire a $2,500 a year budget to spend on doing what they love and getting energized. We call it the Unleash+ budget. It’s how we make sure that our developers are motivated and inspired enough to deliver their best work. There are very few limits on what you can spend your budget on: games, running shoes, coffee, therapy, music equipment, courses, hand sanitizers. The list goes on.
We created the Unleash+ budget because we wanted our developers to do the things they want to do without having to worry about money. The last thing we want is an X-Team developer hesitating to take a course because of its $80 price tag. With the Unleash+ budget, they don’t have to worry about that.
Why do you believe remote work is here to stay?
The coronavirus has pulled the future into the present. It’s shown us that we already have the technological capacity to make so many jobs go remote. We hope that this will encourage many more companies to go remote, because it returns freedom to the individual while also being much better for the planet. Remote companies have a much smaller carbon footprint.
Additionally, remote work reduces traffic jams, allows people to live wherever they want, and makes for a more productive workforce. We believe remote work is here to stay because we’ve seen those benefits and know that even the staunchest opponents of remote work will eventually see them too.
What advice do you have for companies who want to go either fully remote or hybrid?
Ask yourself these questions: